Bloodstained: Ritual of the Night

Diablo 3 and Pay to Win 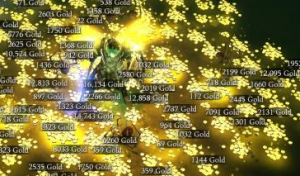 Well not really, but they are experimenting with micro transactions. While it’s no secret that they are preparing to do this in China it also hasn’t been covered much in America.  According to a Blizzard post in their support forums back in Feburary 2015, they are adding a new currency, platinum. This new currency is being introduced in China and will allow people to purchase “timed experience boosts, new cosmetic items including wings, non-combat pets, and character portraits, [and] stash space and character slot expansions.” Is there anything wrong with that?1)Bliizzard forum post. http://us.battle.net/d3/en/forum/topic/16410220920?page=1#1

Well, if they keep that in China then no, there isn’t, at least in my opinion. As mentioned in an Engadget article that model fits the area well. 2)Engadget Article Engaget Articlehttp://www.engadget.com/2015/02/24/diablo-3-microtransactions" target="_blank"> http://www.engadget.com/2015/02/24/diablo-3-microtransactionsHowever if they decided they wanted to move it to the North America servers that would be different. There are several aspects of the micro-transaction model they are proposing I do like. Additional stash space, additional character slots, and cosmetic stuff wall which is fine, what I would I would hate is the addition of anything that affects game play, namely the experience boosts.

It might be a small in game bonus, but it is still a bonus that directly affects game play. As the old adage goes, give them an inch and they’ll take a mile. I have no faith that if they make this model universal for all regions that they will just keep it to  a small bonus, I would expect them to take it further. I didn’t pay for Diablo 3 and the expansion Reaper of Souls to then have Blizzard turn it into a pay to win game. The only pay to win I want in my game is the initial payment of the game.  That fact that I have to deal with playing single player online and deal with their shitty servers is already too much, but that’s a whole other issue.

My main goal here is just to bring this whole micro-transactions testing to the forefront of people’s minds. While I doubt Blizzard would really listen to a vocal majority, chances are they will listen to the rich minority, I still think it’s important for players of Diablo 3 or any other Blizzard games to know what’s going on and be able to make their opinion known.

The end of the tower. You'll see me put on the finishing touch of the chimney and boom, it's done. -- Watch live at http://www.twitch.tv/therealapatheticgamer