So I’ve started playing this game called One Way Heroics 1)The game is so small that it didn’t have a wiki entry so I’m linking the steam page instead http://store.steampowered.com/app/266210/. I picked it up during the last steam sale for something like fifty cents. Honestly it’s not my typical kind of game; I don’t really go for the “rogue-like” games but for how cheap it was I figured what the hell, why not.

My first impression was this game was about as good as it was costly, which is to say not good. The default keys were clunky and not intuitive, the world generation, player difficulty and multi-player modes were not explained well or just outright not explained. The character creation and stats however were not difficult as they are pretty well established in the RPG genre. 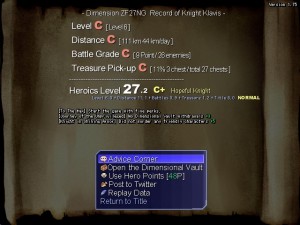 My first play through was over rather quickly. You start out talking to a king who says something along the lines of “blah blah bah, end of the world blah blah” and then you’re off. Each time you move or take an action such as talk, use or equip an item or attack, the Darkness eats part of the world. You have to keep moving to the right or you will be eaten by the dark abyss. I’ll freely admit I was a noob and my first play through I thought it wasn’t a turn based type deal and that the darkness was moving independently of my actions so I panicked and died.

For about two hours I played the game and I started to get a feel for it. The longer you stay alive the more points you get at the end to unlock perks, new classes and to increase your bank size which allows you to take items from your play through into you next game. After those two hours I put the game down and didn’t really expect to go back to it but my boredom got the better of me.

I picked it up again and this time looked into making the game better for me. I double checked key mapping and ended up using my Xbox controller rather than my keyboard. That made it tons better…TONS!  Once I had the controls down focusing on the actual game play was much easier. I finally started to get decent equipment and started getting the endgame points to open up options. An hour later I had finally beat the Demon Lord and became obsessed with the game. I ended up not going to bed till 3am. 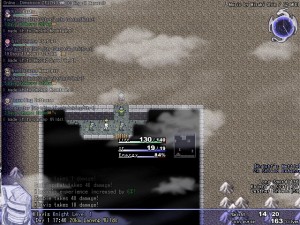 What changed was my outlook on the game, rather than a straight RPG game, I viewed it like a puzzle RPG. Conservation of movement and managing your inventory was very important. The drive to do better after each play through, to get more points to unlock more stuff finally took hold.

Despite my new found obsession there are things I don’t like about the game. One is the item degradation, it’s a huge hassle. I understand why it’s there but I can go through two or three swords in one play through, that’s just crazy especially when you got some nice gear. I have found items to repair shields and there is a scroll that fixes stuff but increases the degradation by 50%, it sucks.  This game mechanic is the only one that still just pisses me off. It shouldn’t be there!

Another issue, well not so much an issue as it is an oddity, is the multiplayer. There isn’t any. They say there is but there isn’t. You can play a world where other people have played and you can sometime see their ghost and you can see how they died, but that’s it. It’s not actual multi-player unlike what they indicate in the game menus. Really that’s a small complaint. I’m not really sure this game could do a real multi-player mode with any kind of success. It’s just not the right format. I believe there is supposed to be some sort of leader board but I can’t find a way to access it either through steam or within the game.

In the end this is a fun game well worth the few cents I paid for it but it isn’t for everyone, that’s for sure. When it comes to rating the game a big part of that rating is the cost. With how little I paid for it I’d give it an 8.5. It’s fun, has replay value, hell the whole point of the game is replay and it runs well. If you pay regular price I’d say it’s about 7.5, a solid game, with all of the good stuff I mentioned before, but it is much more of a niche game and I probably wouldn’t have wanted to pay the $3.49 on the off chance I’d like it.

P.S. I’ll have a video of a play through up in a few days.

So I didn't have enough stones after all and had to go down and do a little southern style mining. -- Watch live at http://www.twitch.tv/therealapatheticgamer