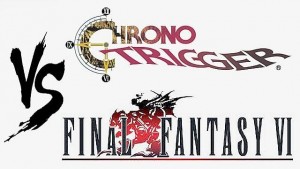 I doubt there is anything I could say about FF VI and Chrono Trigger that you, the reader don’t already know. They are two of the most well known RPGs.  If, somehow you haven’t played either game or god forbid, never even heard of them, well sirs, or madams, you are in for a treat. After reading this article I suggest you go out there, get a SNES3)Super Nintendo Entertainment System Wiki Link emulator and play the crap out of them…err, wait, I don’t suggest that. What I really suggest is going to your local game store, buy an old SNES and pick up both games. That would be the legal thing to do, which is what I suggest. 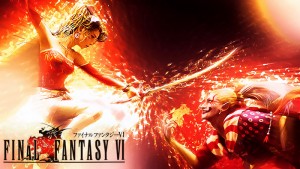 So FF VI, which was released in America as FF III was and is a huge success. It had enjoyable characters, each with their own story fully fleshed out with flash backs and everything. The story was well written, full of serious topics laced with humor.

They incorporated various storylines which overlapped. One notable instance is when you are running away from the Empire who had just broken into your hideout. After a river chase your party ends up separated. From there you have to play all three storylines to get people back together and you are given the choice in which order you want to play them. This blew my mind as a kid.

There are so many great moments from the game it’s hard to go into detail about them all, so I won’t. I will say that the second half of the game, the one where the world has already been destroyed was the closest I ever came to a sandbox game for the SNES (the runner up being Chrono Trigger). The world was open, you could go and gather your old adventuring buddies, gather new ones or ignore many of them and go on and beat the game without them.

Story aside they also had one of the most enjoyable character advancement system I’d played. It might seem quaint now but the Magicite system allowed you to teach anyone one any spell. Each character still advanced along their own path, they had their own abilities and primary attributes, but you could use the Magicite to customize them. With Magicite you could influence, not just what spells they had, but also if you wanted your characters to increase their magic points, hit points or specific attributes. 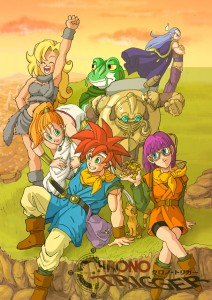 Chrono Trigger was very different from FF VI in so many ways, most notably is the art direction. While FF VI went for a gritty realistic feel, Chrono Trigger was full of color and was very cartoonish, which isn’t surprising considering Akira Toriyama, of Dragon Ball fame, was one of the art designers. The story was also more lighthearted. In general it was a band of hero’s fighting the good fight throughout time, much more like a heroic comic book story than a gritty journey of survival like FF VI.

In the game you had to time travel to several different eras to combat Lavos and like FF VI at one point you can go through the world freely and explore, but not just the world but all time. You could even see your choices you made in one era make an effect on the future. All of which was fun to explore but that wasn’t the most memorable aspect, it was that the game had multiple endings.

This is the aspect that blew my mind. The game had 11 different endings. 11!!!!!  At the time no other game I’d ever heard of had anything like it. Your choices mattered. I remember playing the game over and over again to find all the endings. You must remember this was the time before the internet, you either had to find it all yourself or go buy a guide. I take some pride in having found all eleven endings without having to go find a guide.

So Which is Better

So which is better?  That’s easy, Final Fantasy VI. It’s by far the best game, the characters are fully detailed, and the story is topnotch; it was a perfect cross between a master novel and a game. That being said Chrono Trigger is much more enjoyable to play a second time. I love FF VI and played it countless times, but Chrono Trigger had better replay value, it was made that way.

The multiple endings in Chrono Trigger combined with the new game + feature (a feature where you got to play the game again after beating it with all the same gear and levels from your previous save) screams replay.

With FF VI you had you to create your own reasons to replay the game; unlike Chrono Trigger they weren’t built into the game. I replayed it over and over again with different goals, for example, how fast could I beat the game (4-5 hours by the way), or developing this character a certain way or doing this side quest a different way. It was fun to replay, but I had to make it fun rather than having the designers create the game to be fun to replay.

So why write this whole thing? Honestly I don’t need a reason, they are games everyone should talk about sporadically, much like people still talk about Star Wars or Lord of the Rings, the games speak for themselves. So there you go, that’s my reason…. Bye

Wait, wait, okay, I had another reason, with messing around with twitch I came up with the not so original idea to stream the games I played through them. I first thought I’d play FF VI but now I’m thinking I might play Chrono Trigger instead.

What do you think I should stream?

Where Lucca goes on and on with an explanation of time mechanics and paradoxes -- Watch live at http://www.twitch.tv/therealapatheticgamer