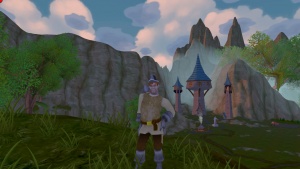 Have you ever had a day where you knew you wanted to play a game but wasn’t sure which one? You knew none of the games you owned fit your mood so you go and browse the games on Steam and then suddenly you find that one game that sounds exactly what you’ve been looking for, only to go down and read the first few reviews, all of them negative, so you just skip on by. Well, that was me, several months and the game? Villagers and Heroes. You might be asking yourself “What changed?” and since you asked so nicely I’ll answer; Oregon pride.

I was watching a twitch stream broadcasting from an Indie Game Con in Eugene, Oregon and one of the segments was about Villagers and Heroes, it was a 15 minute segment and featured The writer from the makers of Villagers and Heroes, Mad Otter Games.2)A link to Mad Otter Games http://www.madottergames.com/ Partly because the game was made in Oregon and partly because it still looked interesting to me, I went back and downloaded it from steam.

Villagers and Heroes3)A link to the Villagers and Heroes webpage http://www.madottergames.com/ is a free to play MMO and as the name suggests it features both villagers and heroes. The main draw is a rather diverse crafting system. Every character can learn and master every crafting and gathering skill and there are a lot. On top of that you can have your own house and even start your own village, but I’m getting a head of myself.

When I first started the game it took an abnormally long time to load, it was not a promising start but at least there was a start. The character creation was fairly detailed, which is a standard for most modern MMOs, however their approach was a bit different. You had the normal character model details, but they added different postures and attitudes you could pick. There are four basic classes and each class was further broken down into two build types which determined starting gear. You then get to pick a region and a house. The house style you pick influences your character through different crafting bonuses. As you might expect you can change your house later. For each choice you make it creates a character background which you can read. An idea that I thought was pretty nifty. It definitely helped make my character feel more connected to the game world. 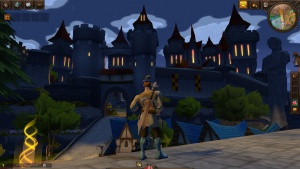 Once finished I was taken to the starting area. I ran around, picked up some quests and situated myself in the story. The writing was engaging, wonderfully campy and concise. There was a perfect balance between keeping it short and keeping it interesting, which I don’t often see in games. Then there was the art style, I loved it. It was a lighter style of cell shading and the buildings had a very stylized medieval European feel. The starting town looked gorgeous and the capital cities’ castle was even better. Both the writing and the artistic style are things I rarely mention. The times I do talk about writing and the art styles it’s usually because it’s a bad thing and detracts from the game. In this case it greatly added to the appeal. 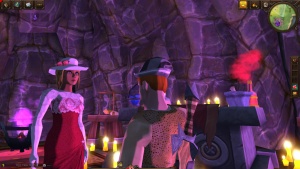 The combat it’s very basic. You get you’re a few class abilities, which are limited and you hit the monsters. The one area where it’s a bit different is your equipment. Equipment can give you special attacks or increase the level of your class abilities. This is where some of the crafting comes into play. If find a great new piece of armor with fantastic stats but the abilities don’t match your play style, you can take your old gear and merge it with the new gear adding the old abilities you want to keep. It was a very nice addition and one I I’d like to see in more mainstream games. 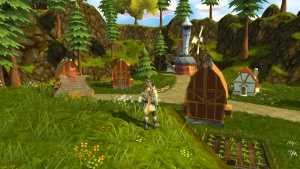 In most other games when they talk about villagers they’re about NPCs however in Villagers and Heroes you’re also a villager. If you wanted you could focus just on being a productive member of a village and the community in general and ignore most of the combat. I wouldn’t suggest that as you’d miss some pretty interesting storylines but it could be done.

Each character gets a house and for each house you can raise farm animals and tend to a garden. Each player’s house is part of a village full of other players; each village can have up to 60 houses.  Within those villages there are community projects that everyone can contribute to and add different things such as crafting stations, statues or even new areas such as a crypt area where you can build a spooky house.

So how exactly can a person forgo being a hero and just be a lowly villager? Through crafting of course!  There are four crafting skills and four gathering skills, way too much to go over in this review, but with the ability to do all of them on one character is a crafters dream come true. Now, if you don’t like crafting components and then crafting those components into more components that then those components can make a usable item, then the crafting aspect of the game may not be as enjoyable. There are different levels of complexity so even if you aren’t into hardcore crafting you can still enjoy the system.

Crafting was also one of the most commonly negatively aspect I saw in the Steam reviews, the overall gist was that the game was too “clicky” and if you wanted to avoid that you had to spend tons of real world money. If that were the case, then ya, I’d probably avoid the game too, but once I actually got into the crafting I found those reviews to be wrong.

It’s true, there are some things you need to crafting 50 or more times in a row. You could do each item one at a time but you also have the option to do all the items at once. There is another object that lets avoid the “clicky” aspect of crafting and you don’t have to spend real world money. This item drops regularly from gathering nodes. I never came close to running out; at this point I have nearly 2,000 of them. So do you need to click things in this game, yes, do you need to do it more than any other game like this, no. 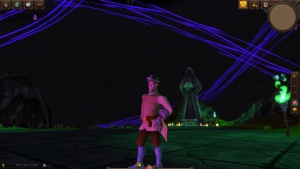 As in most games there are downsides and this game is no exception. I found that there was an issue with object collision. It was very annoying, trees, rocks, hills, buildings; you name it, at one point or another I collided with invisible barriers surrounding the object in question. While not a game breaker it does detract from the enjoyment of the game.

Then there is the crafting, as detailed as it is they miss some key features that would make crafting less chaotic.  There is no sorting options for bags, I fill up quickly and have no way to figure out what I should drop and what I should keep. There should be a sorting function as well as a reworking of the item icons to help differentiate what things are.

There are also way too many items you gather that you can’t sell, they just sit in your bag and take up space which is a real shame. If I went through the trouble of going around gathering stuff I should be able to sell it. Then even if you take your raw materials and make an item you can sell, you end up losing money because the item you created cost more than the sell value.  It’s a mess.

One option is to use the Auction house, but I had little luck there. It’s very basic and sadly requires a relatively large and active user base, which Villagers and Heroes does not have. Don’t get me wrong, people play it, whenever I logged on I saw other people and the community is very nice and helpful, but it’s just not as big and active to allow the auction house to be a go to place to unload raw resources. Having a commodities broker like they do in Wildstar would be perfectly at home in a game like this.

I also noticed that in the quest details it doesn’t tell you what zone you need to be in to complete it. It’s a small issue and usually doesn’t matter, but it’s annoying when you have that one quest you want to finish but don’t remember where you picked it up from.

In the end it’s a niche game that speaks to people who like to craft. Considering the game was made by a small indie studio the game is rather good. While it is playable and enjoyable there is still a lot of refining that I believe needs to be done. If the premise of Villagers and Heroes interests you then you owe it to yourself to give the game a try.