With the coming of the New Year I thought it important that I make an honest and frank post about what has been going on over the last year and what I see for the future. You may have noticed that I made next to no posts in 2016 and I’d like to let everyone in on what happened.

There is no eloquent way to phrase it so I’ll just be blunt. I suffer from severe depression. It’s something I’ve had to live with for nearly 20 years. Depression is a tricky beast; it affects everyone at some point, even if only for a few days. For some people it’s not really a problem, it’s akin to having a little sniffle, a mild annoyance that can be ignored and goes away quickly. For those, like myself, that suffer from severe depression, or more properly called Major Depression Disorder, it’s more like having a serious case of the flu that never goes away. Sure you can take medication, reducing the symptoms, you can learn ways to continue being productive but at times, the coughing and fever is just too much. There comes a point that no matter what you do you find yourself lying in bed swaddled under layers of blankets hopping the fever breaks.

When I started this blog I was in a good place in my life and I attacked the project with gusto and I rode that momentum for several months.  I was producing content several times a month and I was making progress in social media. I kept trying new things, even if they didn’t all pan out. Then slowly I began producing less content until I wasn’t producing any content at all. The nasty beast of depression was rearing its head. 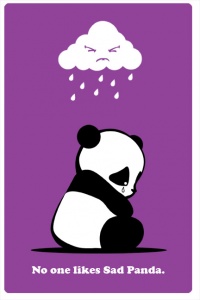 There isn’t one thing I can point to that caused this resurgence, that’s the problem with Major Depression Syndrome, sometimes it doesn’t have any rhyme or reason, it just happens.  It took months but eventually we found a combination of drugs that helped lessen the symptoms. Along with the drugs I was going to therapy but things were looking like they were starting to turn around it all came crashing down. I lost my insurance. The cost of the medications was over a thousand dollars, well out of my price range.

I won’t lie, things got pretty bad, luckily my life was never endanger, while some people start to turn to thoughts of suicide I do not, at least not since high school, however the thoughts of pointlessness that often are the trigger of suicide were still there. Different people deal with them differently, for myself I began to with draw. I found no enjoyment in life, I still tried to see friends, do outside activities but I rarely found any joy in the activities.

Along with the feeling of pointlessness was a deep sense of guilt, the guilt of not being who I used to be. When you get to that point you don’t suddenly forget everything you’ve done in your life. I’ve had successes in my, I graduated college with a triple major, I’ve written the first draft of a novel,  I’ve been running weekend long events with up to 200 people for over 15 years, I’m a leader in my nerd LARPing community and of course there was the initial success of my blog. I felt guilty knowing I’ve done all those things but now, for no easily explainable reason, I couldn’t do it anymore. I still lived up to my obligations, if only barely, but when it came to things where I was accountable only to myself I just couldn’t do them, there was an intangible disconnection that can’t be expressed. It’s like being bound by invisible cords of steel.  You want to move but you can’t.

I continued to pay for my website, I continued to maintain the backend code and I continued checking twitter but I just couldn’t bring myself to create any content. I found no enjoyment in playing games. My signature attitude, apathy, went into monstrous overdrive. I would play a new game and it just wasn’t engaging, I might play for a little bit but hardly enough to make any conclusions. It just wasn’t fun.  Without any games to talk about there really isn’t any content for a gaming blog.  I did do some writing, I wrote a few short stories and even put in some good effort reworking my novel, but overall my writing suffered just as much as any other aspect of my life.

The only game I did and do play with regularity is World of Warcraft, it’s not that it was engaging, it often wasn’t, no I  continued playing because of the monotony and familiarity; I didn’t need to think. I could have just as easily passed my time by hitting a stick against a table.

This past year was very rough but I’ve had worse bouts of depression, I’ve learned to cope to some degree but now that I have my medications again I’m starting to see a more hopeful future.  “The opposite of depression is not happiness [but] vitality”1)Andrew Solomon, The Noonday Demon: An Atlas of Depression and I’m once again starting to feel like I might be able to move forward with my life.

I’m coming off a huge success over New Years. I help run a small convention2)Newcon PDX Facebook Page: https://www.facebook.com/groups/newconpdx/3)Newcon PDX Website: http://www.newconpdx.com/  as the Director of Operations. Including staff we hit nearly two thousand people. It was tons of work (about 70 hours over 5 days) but it was very fulfilling. It was a big step up from running something with only a few hundred people, I learned a lot, and I look forward to our next convention in July (Anime PDX)4)Anime PDX Website: http://animepdx.com/5) Anime PDX shares the same Facebook Group as Newcon PDX: https://www.facebook.com/groups/newconpdx/ .

Where does this leave The Apathetic Gamer?

I believe this leaves The Apathetic Gamer in a pretty good position. I can’t promise that I will be immediately posting on a weekly or bi weekly basis but I can see a future where I’m once again contributing content and being more engaging.

I really hope that reading this has helped everyone understand depression just a little bit better. This is by far the most I’ve ever shared about my experience in any kind of public fashion. I hope that lets those of you who also suffer from depression know you’re truly not alone.

It turns green and shit gets real. -- Watch live at http://www.twitch.tv/therealapatheticgamer