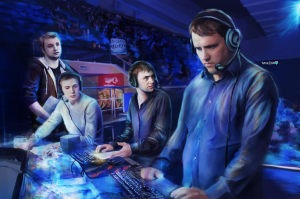 We are truly living in the future and not because we have flying cars, which we don’t, or well, at least I don’t, it’s because we can now make a living as a professional video game player. Crazy eh? I know, I’m a bit late to the Esports reporting scene, but after the prize pool for one game, DOTA 2, reached over $18,000,000 dollars with the number one team taking home over $6,000,000, I couldn’t help myself from diving in and looking into this whole Esports thing.1) I’ve used this site for most of the statistical information http://www.Esportsearnings.com

This article will be a bit longer than most and will be a combination of informative essay, review and rant plus it will be split into 3 parts.

The first question most people ask, “video game playing, that’s a sport?” It’s a basic question that seems to be oddly controversial. So I had to add in my two cents and, no, no it’s not. Next you’ll say chess is a sport and guess what, it’s not. However Esports is a game based competition. I don’t mean this as a snub to all those pro-gamers out there, it still takes a lot of work, dedication and talent, but it’s not a sport, sorry. Sports by definition require a high level of physical exertion, moving the mouse and using a keyboard does not meet that requirement. However the legal definition for a sport for the purposes of obtaining a visa is very lenient. There have been a few pro-gamers given an American P-1A Visa which is given for internationally recognized athletes. So while I firmly believe Esports are not a sport, it does make sense for it to be classified as a sport for legal reasons. When the government looks at an application for a P-1A Visa they do some from the stand point of the activity being a competition, rather than the taking into account how much athleticism is or is not involved.2) The government website explaining the P-1A Visa http://www.uscis.gov/working-united-states/temporary-workers/p-1a-internationally-recognized-athlete

Despite my assertion that Esports are not a sport I’ll still be using the term Esport because, well that’s what it’s being called.

The history of Esports, unsurprisingly, follows the growth of computers. I’m leaving a whole crap ton of information out since I’m focusing mainly on a specific genre of games, multiplayer online battle arena games, better known as MOBAs. Consider the following a proverbial old frame covered in dust.

The first known video game competition 3)An article that talks the anniversary of the first video game tournament http://kotaku.com/5953371/today-is-the-40th-anniversary-of-the-worlds-first-known-video-gaming-tournament was held at Stanford on October 19 1972 for a game called Spacewar.4)The original announcement for the first video game tournament http://www.wheels.org/spacewar/stone/rolling_stone.html The prize was a year’s subscription to Rolling Stone magazine. It’s kind of crazy to think that people were running gaming competitions all the way back in the 70s but I imagine it’s nothing like today. Not to mention the prize was a magazine subscription, what the hell are those?

So now I’m going to ignore the rest of the 70s and most of the 80s. There were, of course, important events but I’m going to boil it down to a few sentences. A lot of it hinged on the classic arcade games like Pac-Man and Donkey Kong. There was one surprising event that foreshadowed things to come, Starcade5)Wiki entry about Starcade https://en.wikipedia.org/wiki/Starcade, a video arcade game show. It ran from 1981-84 and had a total of 133 episodes and 4 pilots.

Then there was the 90s, stuff happened, mostly by Nintendo, but not exclusively. There were still arcades, lots of games like Street Fighter and Mortal Combat, not to mention the founding of QuakeCon6)Wiki entry about QuakeCon https://en.wikipedia.org/wiki/QuakeCon, a convention that unsurprisingly celebrates and promotes games made by id Software and its affiliates.

The genre of games I’m talking about, MOBA’s didn’t appear till the 2000s. It evolved from the Real-Time Strategy genre and can be linked back to a map made for the game StarCraft in 1998 but the MOBA as we know it today was largely modeled off a Warcraft 3 player made map called Defense of the Ancients in 2002. DoTA was the first game in the subgenre which had sponsored tournaments.

From 2002 this infant subgenre began to grow and in 2009 the first commercial standalone MOBA was born, Demigod, a personal favorite of mine. Unlike the MOBA games that proceeded Demigod it wasn’t made with tournaments in mind, however the other MOBA released that year, League of Legends did. Then in 2010 the game Heroes of Newerth was released, which was largely based on DotA. Then in 2013 Valve, after a lot of legal squabbling with Activision Blizzard, released DotA 2 (although Valve ran invite only tournaments starting in 2011). Then Smite was released in 2014 and Heroes of the Storm, made by Activision Blizzard was released in 2015.7)Wiki entry about MOBAs https://en.wikipedia.org/wiki/Multiplayer_online_battle_arena

Delving deeper into the history of the MOBA, as with any history, there are several nuances one misses when reading an overview such as this one. The MOBA genre was undoubtedly created due to a dedicated and passionate modding community. If it wasn’t for the player made content in StarCraft and Warcraft III this genre may never have been created and the popularity of Esports may never have increased so dramatically. Affectively MOBAs did more for Esports in 5 years than any other game in the previous 20 years and in Part 2 I’ll show you exactly what I mean.

Talking about my choices and why I didn't beat Marle. -- Watch live at http://www.twitch.tv/therealapatheticgamer