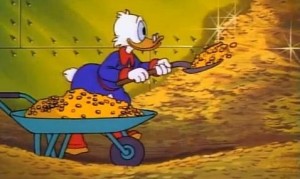 Link to Rise of Esports: Part 1

In Part 1 I did a rundown of the history of the multiplayer online battle arena genre, better known as MOBAs. If you haven’t read it I suggest you take a few minutes and give it a look, it might help. If you don’t, I might cry but, you know, whatever, it’s your choice.  If you don’t read it, you should at least know that I made the assertion that “MOBAs did more for Esports in 5 years than any other game in the previous 20 years”. Part 2 is essentially backing up that that claim with some cold hard but very awesome, data.

The Money Trail1) Note about Sources: All of the financial information comes from  the site E-sports Earnings. The site is dedicated to community base information gathering for all publicly released Esports data. While anyone may submit information they have a strict rule requiring that all information submitted must have a credible source. They verify submitted information before it is added to their data base. http://www.esportsearnings.com

So the first tournament was in 1972 and MOBA’s weren’t born till 2002, so you must be asking if I’m leaving something out? The answer, yes, of course I am and I have a damn fine reason. I don’t think the Esports scene really started to matter till MOBA’s became a thing and I’ll tell you why, money. After I walk you through it I think you’ll agree. Keep in mind that the totals I’m talking about combine all the prize pools for the tournaments when talking about individual games.

In 2005 the total amount of prize money for all gaming competitions was around $3,689,033.04 with the game Counter Strike being the first game to have a prize pool popping Esport’s million dollar cherry at a comfortable $1,010,564.64. Between 2005 and 2010 Counter Strike continued to be in the top spot with a prize pool staying between $1,000,000 and $1,300,000. While the Counter Strike prize pool stayed about the same, the total amount of prize money for gaming tournaments continued to rise every year with a notable exception for 2009; this is was likely caused by the financial crisis of 2008. Counter Strike had a good run as the number one game but 2010 was the last year they would see the top spot. Why you ask? Because of the MOBA of course. 2010 was the same year that League of Legends and of Heroes of Newerth made their tournament debut offering $27,942.64 and $37,564.90 respectively. 2011 and 2012 would see a major shift in Esports

In 2011 StarCraft II took over in a big way making the Count Strike money look like chump change. StarCraft II not only took over the number one spot but it also tripled the largest prize pool with a staggering $3,135,131.22. That year DotA 2 also started to push their weight around in the tournament scene with an invite only tournament with a prize pool of $1,662,268.08. The total prize pool for gaming tournaments in 2011 was $9,738,585.93 nearly doubling from the previous year. That same year League of Legends offered over ten times the amount they did in 2010 to $515,600.90 in 2011. Heroes of Newerth increased their prize pool too but only to a measly $82,990.35. 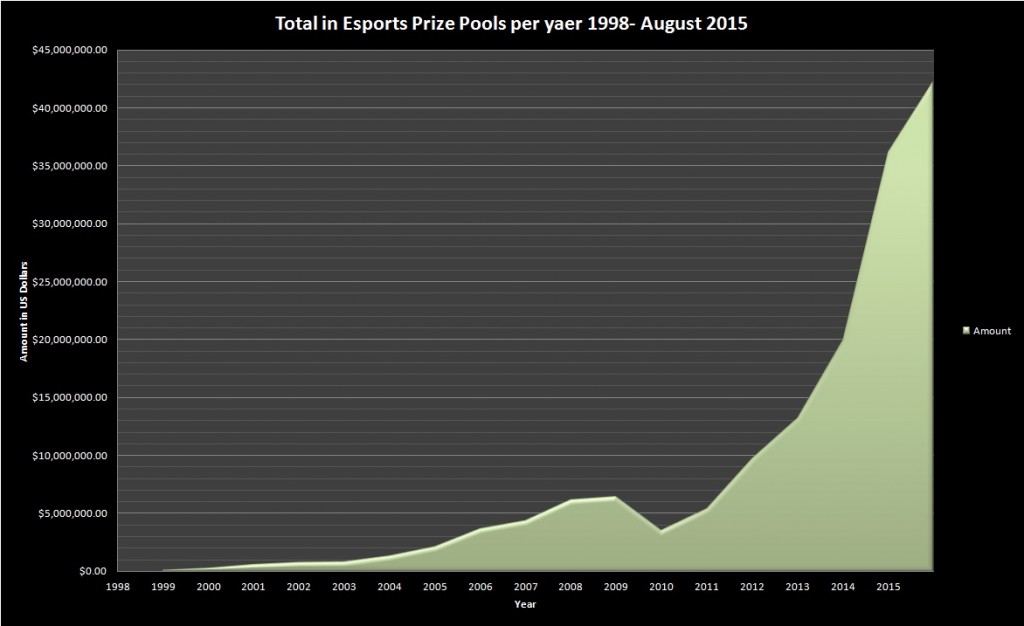 So that brings us to 2015 which has been yet another crazy record breaking year for Esports. Just to highlight how crazy fast Esports is growing I had to rewrite a good chunk of this article when doing some last minute editing. When I originally wrote this the top three spots all belonged to MOBAs then another game snuck in, flipped off all the new kids and jumped back the top three, Counter Strike.  At a little over $3 million it now sits in third place, barley edging out Smite. Based off the numbers for the last few years I really didn’t see that coming. 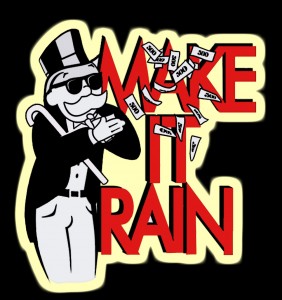 Last month, with the major league tournaments for LoL, DotA 2 and Smite out of the way I figured the top spots for the year were locked in, but I was wrong. Not only did Counter Strike surprise the hell out of me there was also the release of Heroes of the Storm back in June. Heroes of the Storm has already offered $990,110.52 in the few months it’s been, who knows how much it will be by the end of the year. With such a large backing from heavy weights in the Video Gaming Industry it’s hard to guess how far and how fast Esports will rise.

The one thing I can say with certainty is that MOBAs have unquestionably raised the stakes.  MOBAs took this small and slowly developing concept called Esports, clubbed it on its head, dragged it out to the town square and put it on display for all to see.  From there it’s up to the town to see how far Esports will rise. I’m rather excited to see what the future will bring.

At this point you’re probably thinking “Holly crap, people can seriously make a living out of playing games. I need to get in on this.” My response is, yes, yes you do, which brings me to Part 3. I’ll be talking about what the rise of the Esports means to you and how you might be able to take advantage of it.  In addition that I’ll be comparing the major MOBAs, League of Legends, Smite, DotA 2 and Heroes of the Storm and help you decide which game might be the right game for you to focus on and become rich.

Where Lucca goes on and on with an explanation of time mechanics and paradoxes -- Watch live at http://www.twitch.tv/therealapatheticgamer