Gems of War is a role-playing puzzle game made by Infinity Plus Two, the makers of Puzzle Quest. Unlike the Puzzle Quest games, Gems of War is free to play and rather light on the role-play. I’ve been playing Gems of War since it was released on Steam in November 2014. I currently have over 100 hours played.

Normally I wouldn’t bother talking about a free to play game like this, there countless puzzle games out there and often the novelty wears off rather quickly.(Luckily with this one I haven’t gotten bored with it) The main reason I mention this game at all is because of who made it, Infinity Plus Two. Who’s that you ask? Well, you might know them better as Infinite Interactive.1)They had to change their name for legal reasons but they are still the same developers  http://www.infinite-interactive.com/forum/showthread.php?442-Gems-of-War&p=3105#post3105 They made one of the best real time strategy games every, Warlord Battlecry 3. 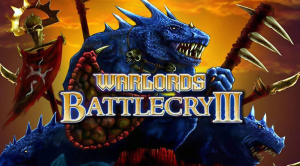 It’s All About The Warlords

If you haven’t played Warlord Battlecry 3 you need to stop right here, go buy it right now and play it.2)Normally I don’t place links to a store for any product but I do think people who like the RTS genre should give this game a try. You can find it here http://www.gog.com/game/warlords_battlecry_3 You can come back and read this later. The game has held up surprisingly well although the UI can feel archaic. Warlords blended the RTS and RPG genres like no one else. It has a robust campaign with numerous factions.  The actions during the RP part of the game has a major affect on how you play the RTS aspects of the game.

Now, you’re probably asking why this matters and I’ll tell you why. The more money the company can make the better chance they will be able to fund the creation of a fourth installment of Warlords and this isn’t some assumption either.  The makers have said as much, they would love to make another installment of Warlords but they don’t have the revenue to devote the amount of time required to do just that. 3) This link leads you to the post made by the creative lead talking about needing funds to create another Warlords game http://www.infinite-interactive.com/forum/showthread.php?207-We%92re-Back&p=266#post266

So without further adieu here is the review of Gems of War.

The core game element is rather simple, you move gems around in an effort to three or more of the same color. The combos power the abilities of your four troops or allows them to attack troops directly. You take turns with the computer till either you or the computer losses all their troops.

Outside of the combat there are sixteen kingdoms you can unlock. Each kingdom has a quest line which ends with you gaining a special troop. Doing the quest also unlocks kingdom specific challenges. Each kingdom has their own set of troops which you get with keys that you can either buy or earn through game play.

There is also a player vs player element but it is very indirect. You choose which kingdom is your home kingdom and determine which troops protect it. Doing so is the limit of the player vs player interaction. When the play attacks another player the AI plays the defending players set of troops. This has the effect of making player ranks a rather meaningless indicator of skill.

This is of course a free game which means they have monetized it to some level. I am happy to report that the monetization is very minimal. You could easily play this game without giving them a thing. What money allows you to do is buy costumes which speeds up the process of gaining troops, gold, experience and souls (the xp for troops). While that sounds like it might make a big impact it doesn’t. You can make a solid group with common troops. As to you level you quickly get to a point where it takes a while to level, but at that point additional level doesn’t directly impact your stats. On the plus side the makers of the game are constantly adding to the game. Each week is a new season which resets player ranks and introduces a new item or troop you can purchase.

Their customer service has also been top notch. The two times I’ve reported an issue I received a prompt and personal reply and not by just anyone, but by the forum moderator, Sirrian, whom I assume worked on the game itself. I also went a little off topic with him and mentioned Warlords 3 and my hope for another installment, which he replied with “Haha – we really hope to be making Battlecry 4 too – that would be GLORIOUS!”. Which made me giddy than any respectable person should be.

Gems of War is a nice time waster, although frustrating at times, but I do recommend it but as I’ve said my reason for spreading the word about Gems of War is rooted in my desire for another Warlords Battlecry game.  if you’d like to see that too I’d ask you give the game a chance or at the very least be vocal about your support of the developers.

If, by chance you try Gems of War and decide it’s a game you’ll keep playing, I wouldn’t mind having some people join my guild, Puck’s Buddies. Just send me your invite code and I’ll send you an invite. You can find the invite code in your Hero Details area.

Talking about my choices and why I didn't beat Marle. -- Watch live at http://www.twitch.tv/therealapatheticgamer