As my very small group of faithful readers will remember I wrote a rather strong rant about Pillars of Eternity a few weeks ago. It wasn’t about game play but more concerning the development process, their advertising propaganda machine and more specifically their retail price. This review isn’t about any of that but about actual game play, visuals and the like.

I will freely admit that I was interested in the game and especially after I was corrected about the lack of voice acting any hesitation I had in playing it was gone. While I stand behind my stance concerning their asking price, and don’t plan on giving them my money, I have been given a copy to mess around with. While I have only put about ten hours (and I plan to play more) I do have more than enough to say about the game at this point.

The Amazing and the Good

I would like say that the best part so far, the part I feared the most, is well beyond my greatest expectations; the dialogue text is super easy on the eyes.  This might be a small thing but in a game with this much reading it is very important. I have never played a game of this type where I could read large blocks of text and not end up with eye strain. That is one of the greatest inclusions of modern game design that I saw. (btw, that was the Amazing part) 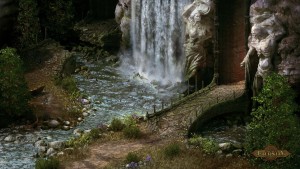 Pretty sure Obsidian Entertainment edited the hell out of this image.

They have taken advantage of some modern capabilities and crammed some of it into an old gaming genre. The water, grass, buildings and all of their other artsy bits are rendered nicely and the details aren’t too grainy (but could be much crisper). However they have fallen into an all too often seen artistic trap, they often lack contrast. In any visual medium there needs to be a certain amount of contrast to keep the mind interested in what it’s viewing. It is important for games to stick within the motif to affect a certain atmosphere, but they also need to be aware of how to get the most out of their chosen range.

For example, the first town that you visit is very dreary and for good reason. The first thing you come across is an old tree full of dead people hanging from its limbs. So ya, not a happy place to be. The whole town is unfriendly and the lord, who you don’t meet yet, is obviously a crazy mother fucker. Naturally the town has a very dark and subdued artistic motif, which is great, but they fail at working well within their bounds. The buildings, people, the road, everything seems to have little distinction from each other, causing what should be an awesome creepy experience to be rather dull and lackluster.  Admittedly this is less of an issue during the day but is exacerbated at night. They use sad tricks such as night over lays and haze overlays to mask and sometimes increase the problem.

As an example I took a screen shot and quickly tweaked the contrast between the roads, characters and buildings as well as slightly deepening some of the colors. The final product isn’t great but you should be able to notice a difference. What Iwould have liked to have seen was a greater difference between the richness of the colors used. I also believe that the hazy affect is their effort of creating a fogy atmosphere and it fails hard. It just makes thing look fuzzy. It would have been better to add a second layer for weather and have a real fog affect that adds to the scene rather than muddles it up. 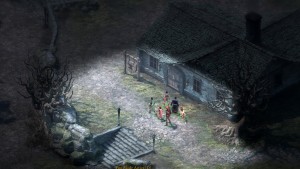 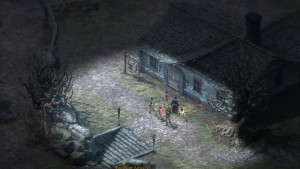 The story is, well, honestly I’m not sure yet as I haven’t gotten to any major story arc, the few smaller ones I’ve encountered have been done well and I look forward to a very well written world but again I still find some faults in the expression of the story. The writing style could just be so much better for the medium.

From what I’ve seen the game reads like a book, which I know some people enjoy, but I don’t think it takes full advantage of the medium on which it is being presented. The length of reading often detracts from the momentum of the game and honestly just seems downright unrealistic at times.

For example, I’m in the middle of a dungeon and I encountered an NPC who wants to talk. To get the most out of the conversation, going through the options, getting some of the background and the like took nearly as long as the dungeon itself. It was ridiculous; it broke the pacing of the game and most disappointingly it took away from the immersion of the environment. I believe I had the option to basically say “Shut up, I don’t care about you” and then walk away, but I’d miss out on the point of the NPC being there and this type of encounter has been repeated often.

In most cases what could have been done was to pare down the NPC’s monologues, tighten their word choices and in some cases change the location of the NPCs.

While I had opinions on making good things better there are just some things that were downright bad about the game. There are some bugs and some of those bugs are game breaking but honestly I haven’t encountered any obvious ones so I’ll leave any discussion about those for other people to review. The biggest set of problems comes from the game being an isometric RPG.

In this Obsidian Entertainment did absolutely nothing to improve on the genre that I could see. The whole idea of isometric view is in fact the view of your game play.  However as the Infinity Engine1)https://en.wikipedia.org/wiki/Infinity_Engine is the hallmark of isometric game play and the games that usually used that engine had other commonalities than the view point, they are often lumped into the isometric game genre as well. However most of my complaints about it could have been fixed.

Having a locked view is often annoying, especially in this game but in combat, especially in vegetation, it becomes your worst enemy. It’s difficult to differentiate between friend and foe, even with the red and green circles, causing selecting targets difficult at times. If you had the option of changing the view in combat to be top down it would greatly decrease confusion. Limiting view choices like this is makes it easier for the makers of the game reducing the amount of work they have to do and really not by all that much.

The view isn’t the only thing that makes the combat horrible but also the “tactical” combat system they are using. It’s the basic model used by most games of the genre but without evolving or even taking advantage of some of the better iterations of this style of combat from older games. To call it tactical combat is a joke, it’s a cluster fuck that you can pause and they throw in some area of affect stuff to make it worse. It’s as if they took a mass combat system from an RTS (like Total War and what not) and figured it would work on an individual scale. Guess what, it didn’t.

When you get into combat there are several things that can cause it to pause so you can make choice for your characters, which is nice. There is a consistent combat system in place with rules, which is well necessary for any game, but when it comes down to being tactical they have choose to ignore lessons from any actual tactical combat games. Firstly it would be best if you could change to a top down view so you could easily see positions, secondly being able to have a grid overlay would greatly help and thirdly the whole system which determines attack speed fails to work across all classes.

If you’re swinging a sword or shooting a bow the system works fine but when it comes to spell placement, not so much. If you use an AoE, especially one that does friendly fire, you’re often screwed. When you start casting the NPC has usually moved unless they are in melee combat with one of your characters. It should be that you instantly cast a spell and then you have to wait x amount of time to do your next action. A rather simple fix but a very important one.

Basically for this type of game you either need to have it be a turn based tactical game more like, you know, a turn based tactical game, or you need to open up the environment to allow viewing at different angles and create a system that isn’t a mass combat system without the mass combat. A great example would be Shadowrun Returns2)http://en.wikipedia.org/wiki/Shadowrun_Returns. If Obsidian had made the game so when you entered the combat it paused and ran more like it does in Shadowrun Returns they would have had a combat system that works and would have elevated the game to a whole new level.

If you loved the game play advancements you saw in Neverwinter Nights 1 and 2 you’ll be disappointed as they didn’t take any lessons from those games.

If you loved the idea of a classic isometric RPG with a fresh and modern take on the genre you’ll be very, very, VERY disappointed. While they managed to make a new game world, it feels like they forgot at least ten years worth of game development advances.

If I were to start rating games on a 1 to 10 scale I’d probably give Pillar’s of Eternity a 7.5. It’s a solid game, fun but not extraordinary in any way that I saw.

So ends my Pillars of Eternity Review.